Make this a day or two ahead of Thanksgiving to free up stove space on the day itself. It freezes just fine if you want to make it even earlier.

1 large butternut squash, halved lengthwise. Scoop seeds and stringy pulp into a bowl and reserve. Do not peel.

Light chicken stock, about a quart and a half or so for a decent sized squash

Port, to taste. My go-to is Fonseca “Bin-27”, a ruby style that is well made, attractively priced, and widely available. But any will do.

Make flavored butter beforehand by simmering the reserved squash seeds and pulp in the stick of butter over low heat. Simmer until the seeds turn golden brown and the butter is colored a nice golden orange. This will take about an hour. Then strain out solids through a fine sieve, pressing hard to get as much butter out as possible. You will lose a certain amount that’s been absorbed by the seeds, so don’t be alarmed. Reserve that liquid. (You can pick out the seeds and salt them for a delicious snack or garnish.)

Spray, or lightly brush, both sides of each squash half with vegetable oil. Place them cut-side down on a baking sheet lined with aluminum foil. Cooking time will vary depending on how thick your squash is, but in general 45 minutes to an hour seems to be what it takes for the average butternut. You’ll know it’s ready when you smell it burning. Or when you THINK you smell it burning. What you’re smelling is the liquid that has leeched out of the squash and is charring on the pan next to the squash. The squash itself is fine. And probably done at that point. Flip it over. It should look beautifully caramelized, with a slight crust around the edges. A knife should slide easily in as well. If not, pop it back in for a little while longer.

In a deep soup pot heat the reserved flavored butter and add the minced onion. Cook slowly for a minute or two, then add the thyme. Cook for another minute and then add the squash flesh. Stir around to form a smooth paste.

Slowly stir in stock, whisking as you go to keep things smooth.

Now you get to exercise creative control: spices!

Don’t do that. Unless that’s what you want, in which case save yourself some effort and just go buy a WalMart Kitchen’s brand pumpkin pie and throw it in a blender. It’ll taste exactly the same.

So what I recommend is using a savory spice – in this version, I chose thyme – and just accent it a bit with the aforementioned spices. This really is one of those recipes where “to taste” actually means something. Add a sprinkle of spice, taste. Adjust. Repeat. Until you go, “Oh my god, I get what Dangerspouse is going for now!”

Generally speaking, I also add a bit of sweetener to the mix. Not much, but I do like some. And one of my favorite things to do is to play around with the sweetener I use. Brown sugar is universally lauded here, and with good reason. Maple syrup gets the nod in many quarters, and I can’t argue. I myself am partial to roasted fruits as they add not only sweetness, but a more complex flavor. Pears are my favorite there.

This time, though, I used port. I had half a bottle left over in the fridge, and went for it on a whim. I’m glad I did. What I did here was add it in two stages: first along with the stock, then near the end, when tasting showed a bit more sweetness was needed. Added benefit: it gave the soup a darker, richer hue. Definitely different.

Let simmer for 20 minutes or so. Doesn’t need long.

Now comes perhaps the single most important step of the entire recipe:

Get your blender out and start whizzing up the soup. Do it in stages, filling the canister about a third of the way full each time. Empty the whizzed stuff into a clean pot before adding another third, and continue on like that til it’s all done.

The key thing here, the thing that will make or break your dreams of soupy success, is make sure you keep the blender on long enough. I can’t stress this enough. You not only want to break down small fibers that squash are known for (as well as the onion bits), but you also want to introduce a certain amount of air into the liquid through agitation. This will give the soup a creamy appearance and texture without needing to add cream.

Why not just add cream, you stupidly ask?

Because you just spent a ton of time, and a fair amount of money, simmering seeds in an entire stick of butter, making stock (if you used homemade), and adding half a bottle of de$ent Port that you really really would have loved to drink instead of adding to soup.

Adding cream will mute all those flavors. It’ll taste like Campbell’s Cream of Bleh soup. I’ve tried it both ways and I’m telling you, this is one creamy soup you do not want to add cream to. (Test for yourself: ladle out a bowl of the finished stuff, mix in a spoonful of cream, then taste. Now taste the au natural version. What did I tell you.)

Now just adjust salt and pepper, and any other last minute tweaks it might need like another shot of Port (couldn’t hurt).

I originally thought I might dissolve in some blue cheese as well, as Port+Blue is such a famous – and famously delicious – combo. But trying it out in a test bowl showed me the error of my ways. It didn’t work. If you had that brilliant idea also, skip it.

Now you just gotta let the soup cool down before you throw it in the fridge. Never put blazing hot covered soup straight into the fridge. Your electric bill will thank you.

Pour the soup into any large, lidded container you have and let it sit uncovered for a while. Because space is already tight from all the things you’re prepping, and because it’s late November and the temps outside are pretty much the same as in your freezer, place the container on the rail of your back porch to cool down. Leave the lid on the kitchen island.

Hose your wife down and have her accompany you to a local diner to meet some friends. (If you don’t have a wife, find a Mormon and borrow one of his.)

Two hours later arrive back home. Take the lid of the container off the kitchen island and and walk out to the now empty rail on the back porch.

Peer over the railing and look at the opossum eating your Butternut Squash and Port soup, which somehow landed upright, 25 feet below in the snow.

Run back in and grab your camera. Take a picture of the carnage, but without the opossum, who fled after your initial bloodcurdling scream. Hope people on the internets believe you, despite lack of possumgraphic evidence.

Close the porch door behind you. Open a can of Campbell’s.

NEXT WEEK’S RECIPE: Maple and Bourbon Glazed Roast of Beaten To Death Opossum. 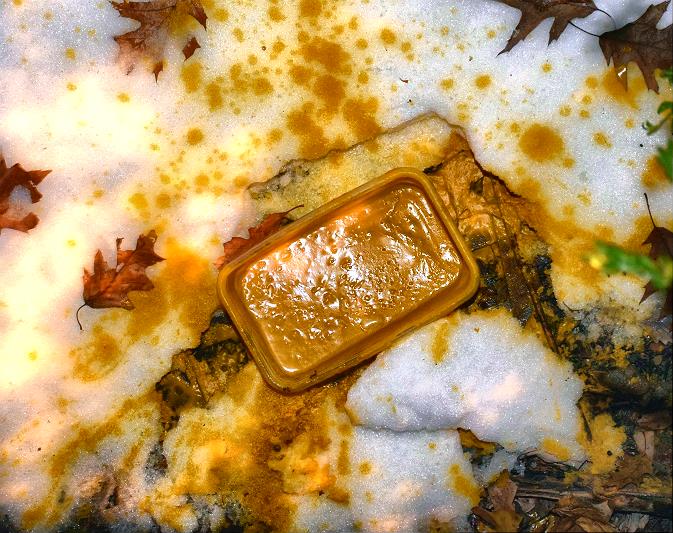 Dedicated to Black and White Film Photography, the Magic of the Darkroom, and the Community that Loves It

I'm Back From Mars

Filled with snark and wine.

Bewitching Kitchen
adventures on the trail blog
When Do I Get The Manual?

Perfecting the Art of Insanity, One Day at a Tiime

A daily selection of the best content published on WordPress, collected for you by humans who love to read.