Welp, another year closer to that cold, unvisited grave.

Normally on my (and Mozart’s) birthday my wife makes me an authentic Sicilian cassata cake, and each year’s is more elaborate than the one before. Witness: 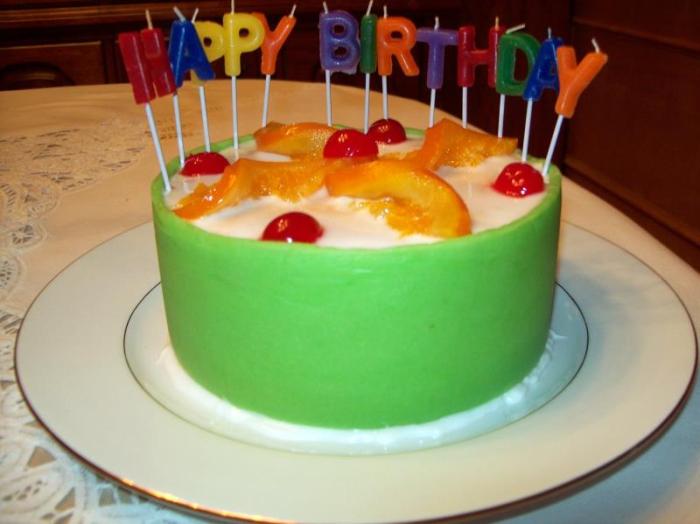 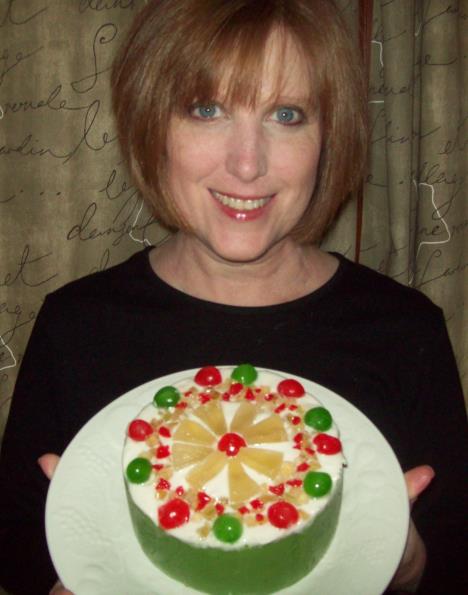 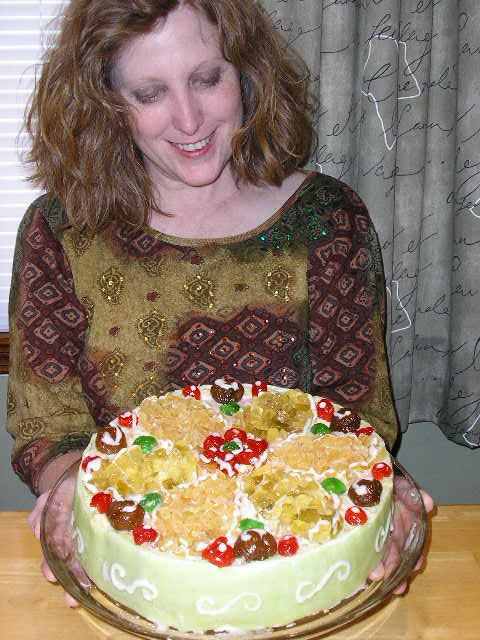 (Yes, these are the pics I posted last year at this time. If you’re new here, give it a read. It’s much funnier than this year’s.)

However last year she was down with the flu and couldn’t make it to the kitchen.

And I’m not getting one this year either.

No, it’s not La Grippe again. It’s those damn two pounds. NewWifey(tm) knows if she makes a cassata she’s gonna EAT a cassata – at least half of it – and afterwards she’ll have to go back on the Worm Diet to keep me from hooking up with Kate Moss.

So because my wife is in danger of getting fat, I have to suffer.

But as it turned out, I didn’t have to suffer much. NewWifey(tm) came up with a brilliant plan: serve me something I love, but she hates so much that she won’t be tempted. 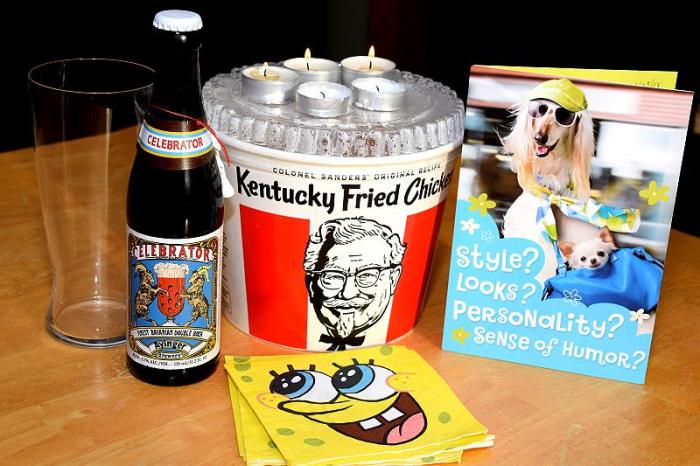 I married well. Yes I did.

I love KFC. For all my high falootin’, toque wearin’, French trained gormandizing, the meal I’m gonna ask for before being strapped into Ol’ Sparky following my conviction for Grand Theft Manatee, is KFC. A bucket of regular recipe thighs, no sides. Not even the crappy plastic spork. Just pass that bucket and I’m off to meet my Maker with a smile. And a grease stain down my shirt.

I love KFC so much I actually learned how to make it myself:

I wrote an entire post about this some time ago, but in a nutshell: it’s not the recipe, it’s the equipment. Those “13 herbs and spices”? It might have been in the original recipe, but now it’s just salt, pepper, and MSG. That battered metal thing is the key. It’s a pressure fryer, not cooker. THAT’S the secret.

But on my birthday, NewWifey(tm) got me the real thing. Not because it’s better than mine (it’s not), but because that leaves us more time to boink. And there are some birthday traditions she will not compromise.

The beer! Now make no mistake: NewWifey(tm) drinks beer. She’s Irish, so it’s an integral part of her religion. And often, breakfast. But she’s not a particular fan of dark beers, and my favorite beer happens to be rather dark indeed: Celebrator Dopplebock, a Bavarian double bock beer that comes with a cute little plastic goat medallion on every bottle (no, that’s not why I like it…not the only reason, anyway). Unfortunately it’s $15 per 4-pack around here, so I rarely get any. But NewWifey(tm) found a place that sells them by the single bottle, so…lunch! And she won’t be tempted to try any. Win/win!

However, before gift giving and and Round-1 of Boinkfest 2018, I decided to try another sunrise photo. I was up again before dawn, but rather than repeat the shots I posted in my previous entry I thought I’d tramp out a bit farther and catch something special: sunrise over Vernon, NJ.

I live up on a bluff overlooking a stretch of the Appalachian Trail, and if I walk down my street there’s an entrance to a part of the trail known as “The Stairway to Heaven”. A lot of city day-hikers come up during the summer – in full mountaineering gear, including tents, starvation rations, and crampons – to trek the full 1 mile to a rocky outcropping that looks down on Vernon, and back again. Then they go home and tell their friends how they almost died of exposure up there on the north face, but managed to make it back to base camp just in the nick of time. Thank god they had crampons! 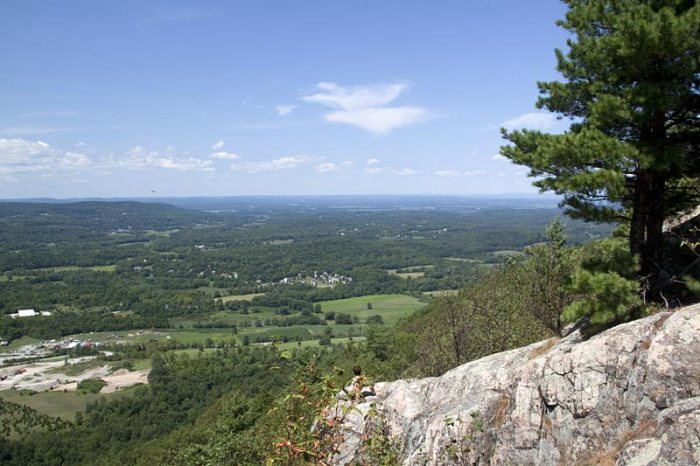 Pff. Amateurs. NO concept of how to compose a picture. The quaint charm that is Vernon is completely lost in a wide angle shot like this. Fools!

This time of year though, none of those incredibly hardy souls venture out for some reason. So I was all alone when I headed out with my camera, tripod, and cat. Somehow I managed to forget my crampons, though.

There’s a little cutout off Barret Road where these dainty hikers park, and I stopped there first to take a quick pic of the historic “High Breeze Farm” farmhouse and the valley beyond. This farm has been continuously worked since being carved out by the original Dutch settlers in the 17th century: 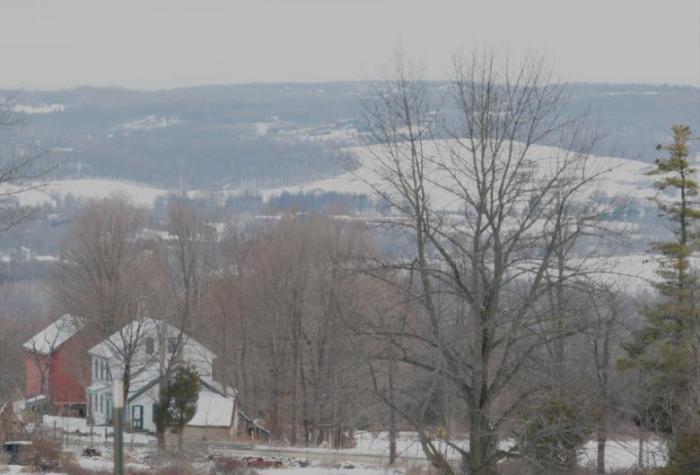 A very grey, misty morning. The temperature was starting to rise, so the fog was also. I had to over-expose several stops to get this shot, as the sun was still some minutes away from making an appearance.

I wanted to get that shot of the sun cresting over Vernon though, so I had to book. The entrance to the trail is just to the left of that pic, and I hustled down it. The cat followed.

The trail was rocky and still snow covered, despite the climbing temps. But I had on my good Columbia hiking boots and a bottle of Cap’n Morgan Spiced Rum, so no worries. In a half an hour I’d be setting up my tripod on a jutting rock and snapping award winning photos of the sun illuminating the whitewashed church spires and rooftops of Vernon, NJ. Award winning, I tell you!

And then my boot exploded.

I was maybe 100 yards from the lookout point when all of the sudden my left foot got very cold, and very bleedy.

What the hell? I looked down and saw one normal looking dun colored Columbia trail boot with black sole, and one that had the dun colored upper, but a snow white base. Where did the black go?

It turns out the black rubber sole decided it didn’t want to go hiking in the cold any longer, and made a break for it. It separated from the rest of the boot in one solid piece, hoping the rest of me wouldn’t notice.

But I noticed right away. The very next step saw my un-soled foot catch the jagged point of a rock buried under the snow, and it sliced a gash from pinkie toe to arch.

Dammit, of all things. A mile into the woods, mere minutes from my destination (and the subsequent award winning photograph) and a wardrobe malfunction strikes. What should I do? Soldier on, ignoring the pain and stench of blood, til I got the shot? Or turn and leave?

I’m a pussy. I turned and left. I thought, “I wonder if the smell of fresh blood will be of interest to any of the large black bear population around here?” and decided yes, yes it might.

I hobbled back to DangerHouse along the snow covered trail, wincing every time my bleeding foot landed on another pebble, then not wincing once it became numb from cold.

I should mention here that the cat was no help at all during any of this. He sniffed at the wayward rubber sole, rubbed against my shin, then just lay there purring and looking inscrutable while I rocked back and forth holding my bleeding foot. He could have at least caught me a squirrel or something to keep my strength up.

Finally, of course, I did manage to make it home where NewWifey(tm), unlike a certain ingrate cat, was very sympathetic and helpful. Remind me to give her a treat later. I took a hot shower, she bandaged my foot, and I’ve been sitting here ever since writing this entry until the pain subsides.

And now it has.

Let Round-1 of Birthday Boinkfest 2018 begin!

After a beer and a thigh, that is. It’s my birthday, after all.

And remember kids, nothing is worth losing your sole over. Take it from me.

Award winning, I tell you! 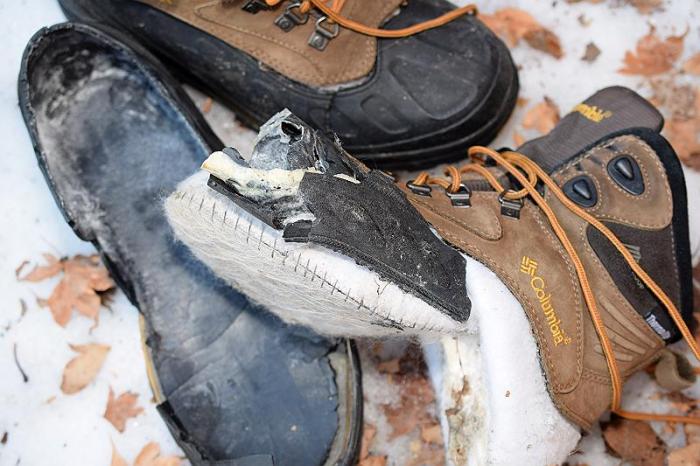 52 thoughts on “Losing My Sole on the Stairway to Heaven.”