We went to the City.

We went to the City five days before Christmas, along with seemingly every other organic communal life form that evolved to breathe oxygen in the universe, to gawk at the Macy’s window, the windows along 5th Avenue, the tree in Rock Center, and that family of 9 from San Antonio waiting in line at the TKTS booth in Times Square hoping to score half price tickets to see The Lion King. Again. Complaining of the unbelievably frigid 45-degree weather the entire time.

The one concession I demanded in return for agreeing to go, however, was that we leave the house early. How early?

“I can’t believe it’s not even 5am and I’m standing outside waiting for a bus. You’re insane!” said NewWifey(tm)

“I’m telling you, if we’d waited til 6 the Park-n-Ride would already be filled and we’d have to drive through the Lincoln Tunnel. And at 6am the Lincoln Tunnel is gonna have an hour long line at the tolls, minimum. After which we’d have to find parking – at 30 dollars an hour – in midtown Manhattan, a near impossibility this time of year.”

“Why didn’t we just wait til after rush hour to come in?”

“Because then we’d be leaving the City during rush, getting caught in that same traffic going back. And we still might not even have found parking by then. Trust me, this is better.”

So Wednesday morning our alarm went off at 3:30am, we showered up, coffee’d up, and hit the road. An hour later we pulled into the North Bergen Park-n-Ride – which was already half full – and got at the end of the line to grab the 5:05 bus into the City.

At 5:20 we hopped off at the already bustling Port Authority bus station on the west side. NewWifey(tm) had plotted out the course she wanted to walk, and it started with Barney’s on Madison Avenue at 60th Street on the east side. So we did escalators and corridors and stairs and more stairs until we got to the Times Square station, where we hopped on an R train. The R has a stop 59th and Lex, a block from our starting point. Game on!

At 6am on the dot we got off the R and trudged the stairs to street level. A block west, then a block north, and we were at Barney’s.

Where the first thing we saw was cloud rape.

The Barney’s windows were AWESOME, the highlight of my morning. Seriously, Google them.

But, yeah. Cloud rape. (Although from the look on her face, I’m not sure it was rape. Maybe #METOOANDILIKEDIT. )

Here’s the full 9 second animated sequence, btw. Make sure the kids are out of the room.

Lord and Taylor’s had a window depicting two of the last remaining polar bears on earth celebrating an impending kill, which I thought was nice.

Some stores that didn’t have display windows got into the spirit by covering their grimy exteriors with as many 50,000-watt bulbs as City ordinances would allow.

That was all on one plug, btw. You could smell the ozone from Jersey.

I liked this one. Who knew the NY Philharmonic had their own window? 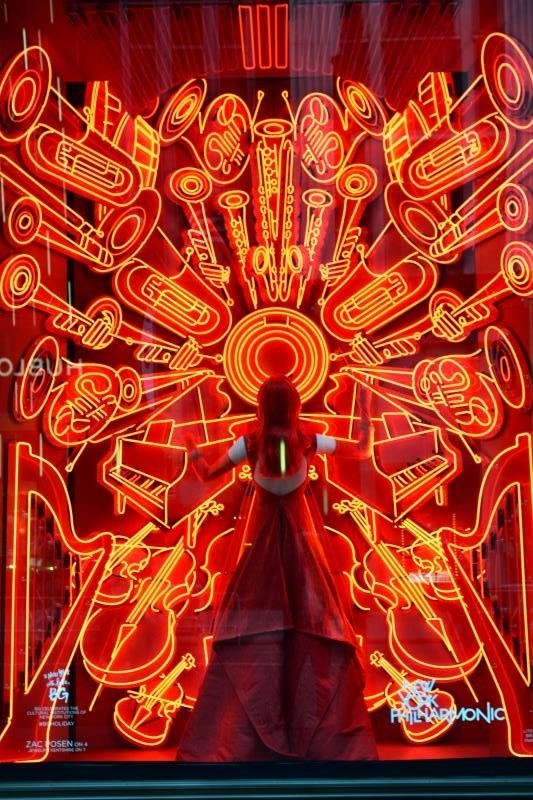 Eventually we hit Rockefeller Center, and the tree. I tried to take a pic, but NewWifey(tm)’s hat photo-bombed me.

I kicked her out of the way, but she kicked me back. Hard. As I was lying there nursing my shin, I took a shot from ground level. 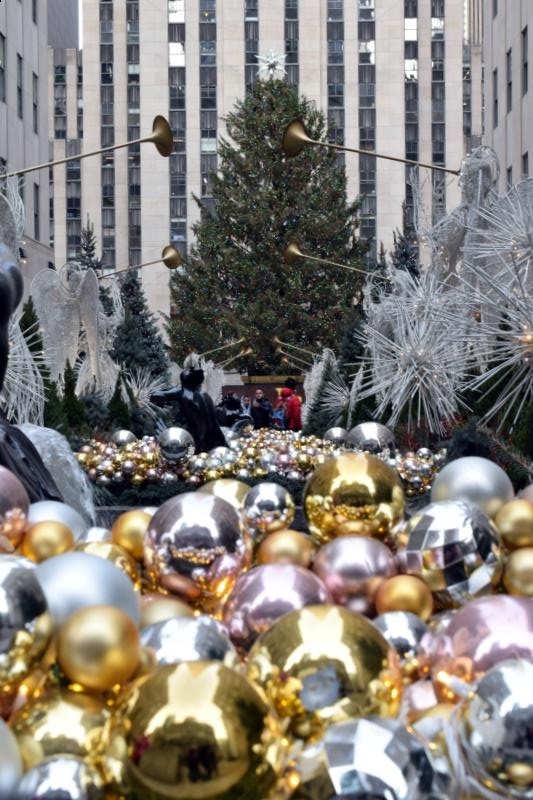 Couldn’t get the tree centered because there was a large pedestal right there. I considered knocking it down, but there were heavily armed security goons everywhere. God, it was so much better before these stupid terrorists ruined it for us Good Folks.

I’ve gotta say, as imposing as the tree was, the sight of it unlit during daylight hours is pretty disappointing.

So I added boobs.

There we go. Boobs make everything better.

BTW, if you ever go there yourself, tear your gaze away from that gigantic bit of flora for a minute and spin 180-degrees. You’ll see this: 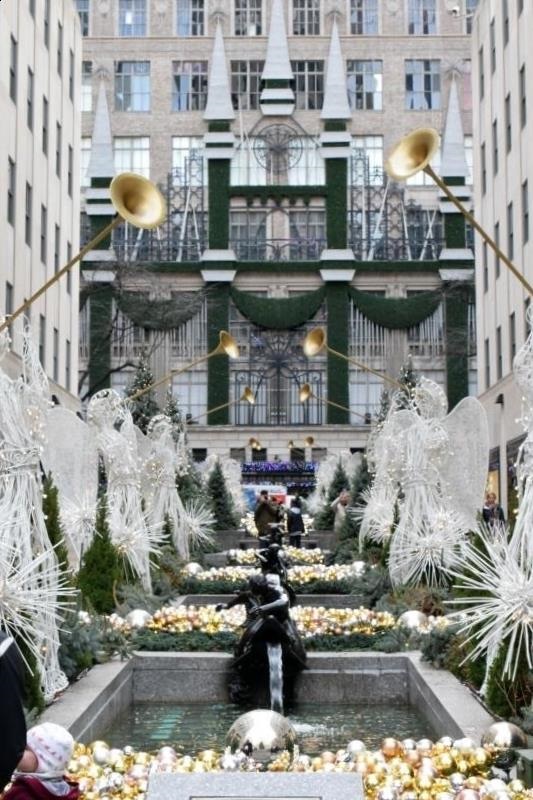 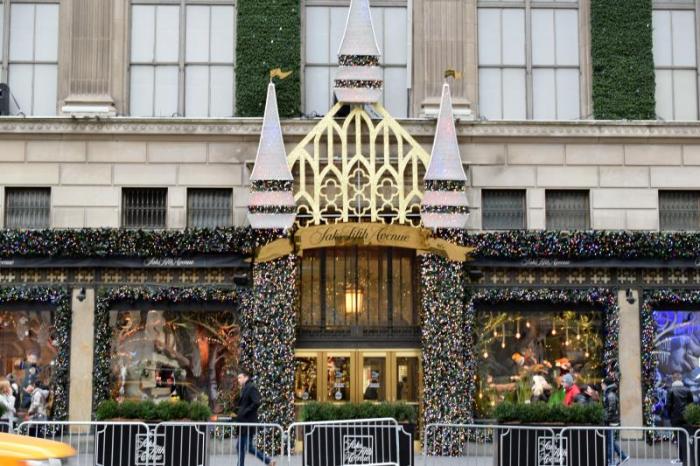 The gates are there to keep people not wearing ties out. But we got around them and soiled their sidewalk with our commoner shoes anyway so we could look at their – for some reason – Snow White and the 7 Dwarves movie tribute. For Christmas.

It also had a rape scene.

As are the squirrels.

This one almost took my finger off at the elbow when I tried to feed it a hot dog.

Around the corner was the New York Public Library. No lights or window displays, but they did force the lions (appropriately named Patience and Fortitude) to don silly Christmas garb. Here’s Patience. Or Fortitude. 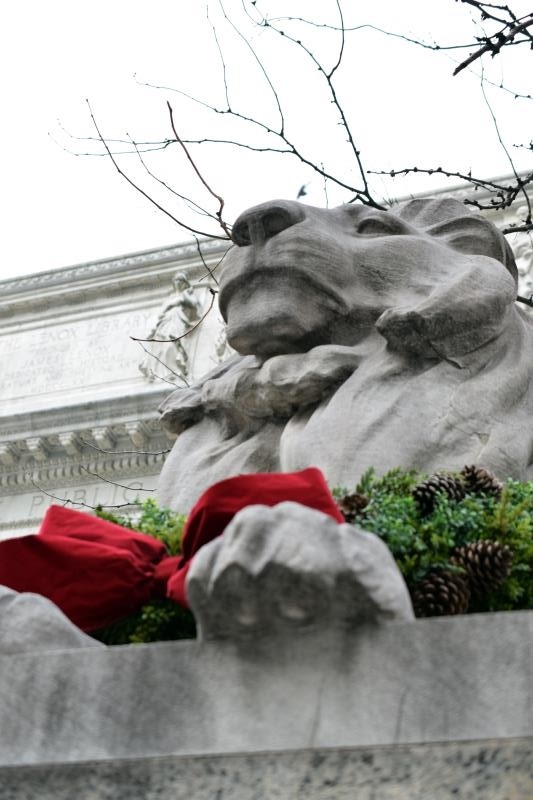 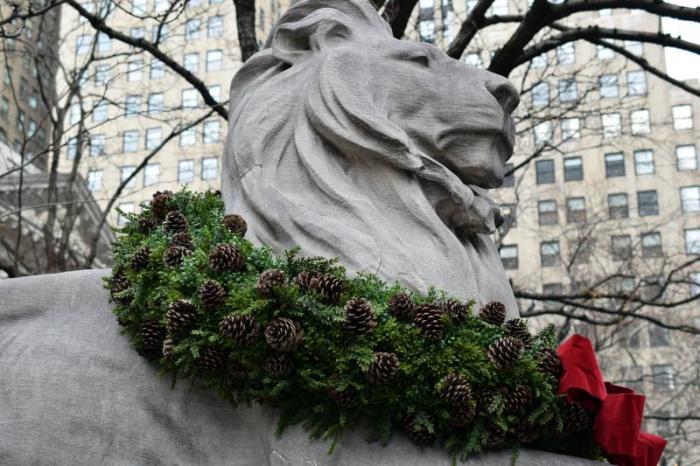 I felt bad for him. Those cones itch. I know.

He wasn’t the only feline forced to posture for the holiday. This is from the Cartier window.

I suggested they title that “Time For Cats”, but they ignored me.

A little farther down 5th I spotted this tree in the courtyard of some officious looking building, but because it wasn’t 450 feet high and exploding with more lights than the city of Paris, no one stopped to look at it. I did.

“What the hell are you doing?” NewWifey(tm) said. “All it has is white lights!” I felt like Charlie Brown….

Finally we made it to Harold Square, and

Why was that such a poorly framed shot? Because at 10:32 in the morning, it already looked like this: 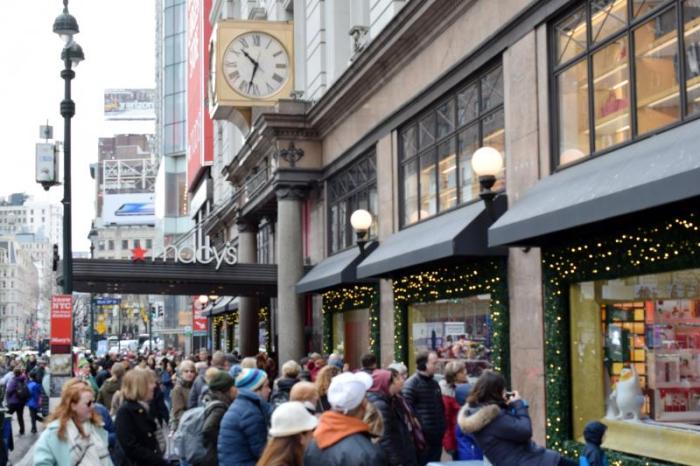 I had no place to stand. This, and the following, are all “hold the camera up over your head as far as you can and hope” shots.

Macy’s window displays were, as always, incredible. I tried to think of a better descriptor, but “incredible” really is the most apt. Unfortunately, because of the crowds and my shaking in rage at them, I couldn’t get many good pictures. But here’s a few that aren’t as sucky as others.

One window had a cylinder model of Central Park, which slowly spun and showed various scenes. It was really incredible:

Nah. Y’know what? ALL the pictures I took here turned out sucky. Go hit ’em up on Google Image, and pretend I took those, ok? Thanks.

Wait, I think I will post one, sucky or not. It’s a giant dancing cat. She twirls around, and when she farts it billows her skirt up, revealing a bunch of mice doing wheelies on dirt bikes. Crappy picture or no, I gotta post that.

Boy, do I need a polarizing filter. Write that down.

NewWifey(tm), btw, was having the time of her life. Me, jaded local, suffered through every excruciating minute of that jaunt through Tourist Town. But my little Midwestern bumpkin wallowed in it.

I haven’t seen her smile like that since I told her I knew how to make Pimento Cheese.

Once there were no other windows left to press our noses against, we made our way back to the Port Authority. Along the way we saw a pair of shoes NewWifey(tm) wanted.

But as this was a shop on 5th Avenue, they cost almost as much as a real taxi. We kept going.

“What’s up?” I said, looking around. I didn’t see anything I thought she’d find funny, like a hobo on fire or anything.

“What blows AND sucks?” she said.

She pointed across the street.

(Still not as good as the time we went to see the Radio City Music Hall Christmas Spectacular a few years ago, and midway through the show she leaned over and whispered in my ear, “What’s the difference between a circus and the Radio City Rockettes?” “What?” I said. “The circus is a cunning array of stunts....”)

Along the way we spotted this dress made of genuine fir.

I hope PETA doesn’t get wind of this.

Then we were at the Port Authority. It was barely after noon. There was hardly anybody on line waiting for the bus back to Jersey. 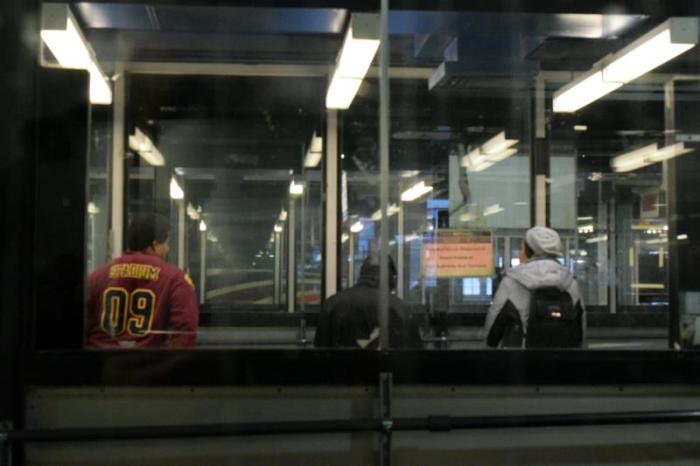 And just like that we were dropped off back at the North Bergen Park-n-Ride, and an hour later we were sitting in the kitchen of DangerHouse having a beer.

“Yeah, you’re right” I said. “But only because we traveled off-hours.”

“You know, I kinda liked it that way. Yeah, it sucked getting up at 3 and arriving when everything was closed. But it was nice not having wall to wall people everywhere we went. And we got to see cloud rape!”

“Hang on” she said, picking up the camera. “I’ll answer that with a picture.”

Hey listen, if I’m not back before Monday I hope you and yours have a very Merry Christmas. Maybe this year you’ll get that pony!

Martha Ann Kennedy's Blog, Copyright 2013-into perpetuity, all rights reserved to the author/artist