When I saw today’s Prompt du Jour, I immediately thought “Yellow Journalism”. Being a radio news readin’ guy that’s a subject I’m acutely aware of, especially these days. I was all set to go off on a(nother) self righteous defense of my chosen profession, pontificating on how a free and independent press is essential to democracy. Then after that I’d start in on a vitriolic tirade about how Steve Bannon, evil Grand Vizier advisor to the President of the United States (edit: and, I can’t believe this, just moments ago promoted to the NSC’s principals committee, godhelpusall), can pronounce “the media is the opposition party”, while simultaneously adding an ominous warning to the Fourth Estate to “keep its mouth shut”. Y’know, the usual.

But it’s Sunday and I’m off the clock. Anyone wants to pay me SAG/AFTRA rates, I’ll scribe it. Otherwise, until 4:30 tomorrow morning when I start writing my first newscast of the day I don’t wanna even even THINK about how the current administration seems hell bent on turning us into Turkmenistan, complete with gold, rotating memorial to the nation’s leader. (since replaced with a stationary model, alas). (And yes, I know the memorial is to their PREVIOUS leader. But don’t expect the current Cheeto in Chief to wait for that nicety. “It’ll be beautiful! Amazing! And the Chinese will pay for it!“)

So instead I’ll write about cooking. You have been warned.

Years ago I had the great good fortune to work alongside a fabulous saucier at a ritzy little restaurant called “L’Auberge de France”. It was my second cooking gig, having been sent there by my first chef in order to broaden my culinary horizon.

(This is a very old school European way of training chefs. You apprentice to a chef who teaches you the basics, then after a year or two s/he arranges to have you cook in other kitchens to learn other techniques and styles. You might spend a month, you might spend a year, in your new kitchen. Then off you go to yet another restaurant to learn even more. After you’ve finished your Grand Tour 5, 6 years later,  you’ve had a really good grounding in each brigade and can now start working your way up to sous chef or even executive chef status somewhere.)

This being a classic French establishment, sauces played a huge role. They had a dedicated saucier – one of only two restaurants I ever worked at that did – and a huge part of each day’s prep revolved around his sauce production. In fact, in order to produce the basic meat sauce bases (first stock, then from that: “Glace de Viande”,”Jus de Veau”, “Espagnole”, and finally the reduced, enriched “Demi-Glace”) most of us had to work on the restaurant’s closed days, since that was the only time you could dedicate that many resources to one single dish.

By the time my stint there ended and I moved on to an Italian place, I was pretty well practiced at producing not only all the mother sauces, but also many, many of the constituent daughter sauces, plus emulsified and dessert sauces. In many ways, this is still my favorite field of fine cooking, although I rarely get to use the overwhelming majority of what I learned any more. I mean, when the first line of a recipe reads, “Get 15 pounds of beef shins and 15 pounds of veal shins, saw them into 3-inch chunks and splinter them”, you know you’re gonna have a tough time just with space considerations alone. Not to mention cost. And that’s just one ingredient; the list goes on rather extensively after that.

For the most part, then, I stick with chicken stock for the vast majority of my meat sauces. “Fond Blanc de Volaille”, and the veloute made from it, is relatively quick, infinitely less expensive, and works pretty well in just about any dish you would normally use beef stock. Or at least, that’s what I’ve convinced myself is the case.

So today I decided to make up a batch of chicken stock. Partly because I was running low, and partly because my local grocery has chickens on sale for 79-cents a pound this week. Woot! I went shopping this morning and came back with four whole chickens. One is roasting on a bed of carrots and fennel right now, two are in the freezer, and the fourth is being made into stock.

I’m doing something a little different this time with my stock production, though. Years ago I read an article by some celebrated chef or other, and he was singing the praises of a way of making chicken stock that he had recently come up with. Basically, he took a whole chicken, stuck it in a pot, added no liquid, put the lid on, then stuck that entire pot inside a much larger one that was partially filled with simmering water. (A “bain-marie”, if you’re familiar.) This was kept at a low simmer for 8 – 10 hours, after which you’re left with pure, concentrated chicken essence. No dilution from added water, like traditional stock. I gave it a try back then and it was indeed excellent, although as you might expect the volume was very much lower than when made the usual way. It’s probably telling that I don’t remember making it ever again following that first batch.

But this morning, looking at four naked chickens on my counter, it hit me that this might be a good time to give it another shot. Particularly as I have – you guessed it – a theme-appropriate bright yellow cooking vessel! It’s kismet, I tell you.

Oh, one other thing. I’ve had a hankering for some Asian dishes that require Chinese style chicken stock. So I’m varying the original recipe – which pretty much just calls for a chicken and nothing else – and adding in some aromatics to suit my anticipated future dishes. Home cookin’, baby. There are no rules.

Ok, so here’s the mis en place. A chicken, ginger (I’m not using the whole thing, just a few slices), star anise, scallions, and white pepper. Two cooking vessels, one nestled inside the  other. That’s it:

And here it is ready to go. The chicken’s been skinned and the aromatics stuffed in the body cavity. Just have to pour hot water between the two pots and set it to simmer: 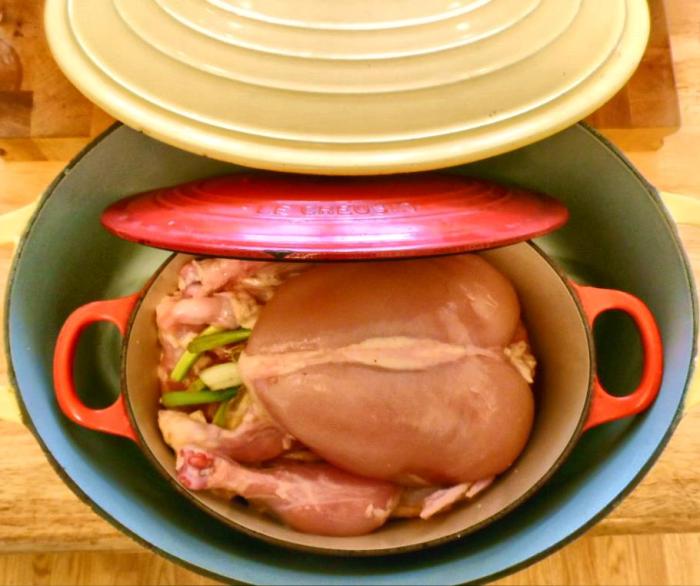 I won’t know if this works for another couple of hours. When I pull it off the stove I’ll update this entry with pics of the finished product (unless it sucks and I’m too embarrassed and worried that my reputation will be ruined, ruined!).

I’m sorry those of you who are not cooking pedants and were bored stiff by this entry (if you even made it this far). I’ll come back with more risible fare in the not-too-distant future. It’s just that, y’know, yellow. I didn’t really have an option.

After 7 and a half hours in a bain-marie, this is what we have:

I don’t know if you can make it out, but that’s just shy of 3 cups of stock (technically “broth”) in the measuring cup. In fact, it went just over 3 cups when I added the liquid that pooled at the bottom of the chicken while taking the picture.

It was strained through muslin, and only required the slightest de-fatting (no skin).

One good sign: the chicken meat on the left looks like it’s nice and poached, but it has absolutely no flavor at all. Not even good for cold chicken salad later. All the flavor got dumped into that elixir of a stock.

The stock itself, on tasting, was intense. There’s no other word for it. Look at that color. You usually only get color like that with roast chicken stock. This rich amber wasn’t from roasted bones, but rather just sheer concentration. Very unctuous mouthfeel, also. If anything, it’s going to need to be diluted for some dishes.

So there ya go. I think I’m going to start making chicken stock this way more often. Not every time, because it’s just too…too… for a lot of applications. But I tell ya, I could pass this off as a double consommé de volaille no problem at all, practically as-is. All I’d have to do is clarify it and no one would guess I hadn’t gone through the usual time consuming process that requires. I know I wouldn’t.

Alright, time to take the toque off and get to bed. Tomorrow morning at 4:30 I’ve got to go back to chronicling the destruction of the free world.

And that’s something you can take stock in.

Perfecting the Art of Insanity, One Day at a Time