Remember how in my last entry I kept going on and on and on about how women and men are equal and anything a man can do a woman can blah blah blah blah blah? I still stand by that, but I want to draw your attention to the brief comment I also made noting that women could also be just as prone to err as men. That’s the downside to equality.

Two days ago I got an email from NewWifey(tm) while I was at work. This is pretty unusual. She knows I’m normally so busy that I don’t have time to check messages, so she holds it til I’m off the air. But I just happened to catch this one coming in, and since, as I say, I know she generally doesn’t bother, I figured it must be important. So I opened it.

“Honey, would you buy a bottle of Dawn dish soap on your way home from work?”

That’s all it said.

She interrupted my show prep to send me a shopping list?

I had to know more.

“Yeah,  no prob” I wrote back. “But there’s an almost full bottle of Palmolive under the sink. Why don’t you use that?”

“Because I read online that Dawn is better for getting vegetable oil out of your hair.”

I knew I was gonna regret it, but I wrote back anyway. “Why is there vegetable oil in your hair??”

“Well you see” she replied….

NewWifey(tm), as I’ve mentioned previously, is – to my ongoing amazement – a prodigy at needle arts.  Specifically, the art of cross stitching. She can embroider a chicken like nobody’s business. AND have it featured in a needlework magazine a week later. She’s so good, in fact, that people started writing asking where they could buy her chickens. Then they asked her to teach them chicken stitchery.

At that point the little bell went off in her head. ‘I bet these idiots would pay!‘ she thought. And she was right. They would. So she started a business selling and teaching chicken stitching.

Ok, ok. I lied. It wasn’t chickens that propelled NewWifey(tm) to fame. It was stuff like cross-stitched alphabets, historical samplers (ie: old alphabets), and holiday themed wall hangings. But that stuff sounds boring, so I went with “chicken”.

That stuff sounded boring to NewWifey(tm) after a while, too. Alphabet after alphabet. Santa Claus after pumpkin after Easter Bunny. Same stuff, different frame.

“I wanna go off the wall” she said to me one day.

“All these samplers I do, all these fucking alphabets, and cats, and hackneyed aphorisms ...” she swept her arm around the walls where much of her handiwork hung, “it all just hangs there gathering dust. It’s getting boring. I wanna make stuff that doesn’t hang on walls.”

So NewWifey(tm) got her stitching freak on:

She started stitching eyeglasses. On the glass, not the frames. Sunglasses and readers.

She made up patterns, templates, and a jig to hold the lenses while she carefully drilled holes in them. Then she packaged the pre-drilled glasses with thread and instructions, and little old ladies went nuts. This was 3 or 4 years ago, and they still sell like cronuts.

She’s added plenty of other off-the-wall designs to her collection since then. Her popularity has risen as a result to the point where she’s constantly being invited to trade shows, exhibitions, and individual needlework shops to hold workshops and display her new designs. In fact, if anything she’s more in demand now as a teacher than a designer. She gets calls from all over to instruct other stitchers on how to do the specialty techniques she’s mastered, some of which are obscure, some she actually developed herself. If I wasn’t so bored by cross stitching in general, I’d actually find that rather impressive.

But back to the story.

I brought up the glasses because of a problem she found after she started making them: drawing floss (that’s what they call thread…I don’t know either, so don’t ask) through the sharp edged holes in the glass often made them shred, sometimes even break. As a solution, she used some kind of floss strengthening goop available on the market. But she was never really happy with the stuff, and it was pretty expensive. Instead, she hit on an old school solution: running the floss along a block of beeswax first. That made the floss stronger and slicker, allowing it to glide right through those eyeglass holes without catching or tearing. Best of all, you couldn’t tell visually they’d been treated.

I’ll cut to the chase here. She started making her own thread waxers, and packaged them along with everything else in the glasses kits.

An odd thing happened. People went CRAZY for the waxers. I mean, moreso than the product they were supposed to support. Shops started calling asking if she could send them just those little blocks, without the glasses. Soon NewWifey(tm) hit on the idea of making them in cutesy shapes with cutesy names.  Now those little 3-dollar items are probably the biggest part of her business. They certainly are volume-wise, if not dollar-wise.

They do take a lot of work to make, though. It starts with melting large blocks of pure beeswax very slowly. It’s like tempering chocolate; it has to hold at a specific temperature in order to both flow freely and cool at a proper rate so it doesn’t shrink too much. When the wax hits its sweet spot, NewWifey(tm) carefully fills mold trays one after another and cools them down – again, at a specific rate. After that the waxers are hand trimmed and packaged. “She works hard for her money. So hard for her honey….”

To help her in this endeavor she got herself an induction burner. You’ve seen these things, right? They use magnetism to heat up the pot, but the burner itself stays cool. The critical feature for her, though, is that these things are digital. That means she can just dial up whatever temperature she wants, and it will automatically keep it there. Science to the rescue!

That little induction burner, and the dedicated steel pot she bought to go with it, has been a real time saver. What used to take all day, what with constantly moving pots on and off the regular stove to get the temperature right, now gets streamlined to just a couple of hours. So now she only has to make waxers once a week or so, rather than every day or two.

This past Monday was Wax Makin’ Day. Wax Makin’ Day was supposed to have been the previous Friday, but it got pushed back due to preparations for the Women’s March on Washington. That meant the large blob of solid wax in the pot had been sitting there almost three days longer than normal, getting harder and harder. No biggie.

So on Monday NewWifey(tm) got up, had a croque-madame, and got to work. First things first, turn on the induction burner so the wax could melt. While that was happening she assembled the rest of the ingredients.

Once everything else was set up and ready to go, she looked in the pot. To her surprise, the wax hadn’t melted at all. It was still solid right across the entire top of the pot. She checked the induction burner, but that was working correctly. The side of the pot was hot, so there had to be power getting to it. She decided to see if the wax was at least soft.

To do this, she grabbed out a metal shish kabob skewer and poked the top of the wax.

Instantly, a geyser of molten wax shot through the hole straight up to the ceiling. It didn’t stop after the initial eruption, either. A plume of ejecting beeswax kept spewing from the widening hole, with such force that the splatter from the ceiling-strike ended up coating the wall behind our stove a good ten feet away. The floor was completely resurfaced with hardening wax in an arc probably 5 feet wide around the induction burner. Our landline phone directly behind the burner took a direct hit, and now the handset is completely welded to the charging base.

And, of course, NewWifey(tm). Fortunately she had poked down with an extended arm, so the volcanic spray didn’t catch her full in the face. If it had, she would have looked like one of those Jurassic bot flies trapped in amber. Her hand got instantly and completely coated, but the rest of her was mostly hit with side-spray. A certain amount also ricocheted off the ceiling, so hard that it slammed into the back of her head and matted her hair with marble sized clumps.

Thankfully the wax was only 130 degrees, 140 tops. So even though the impacts stung, she wasn’t actually burned. Well, her hand turned red and wrinkled up a bit, but otherwise she came out ok. Kinda like she just got a full body Brazilian.

Check it out. (And no. Despite how it looks, that’s WAX. This time.) 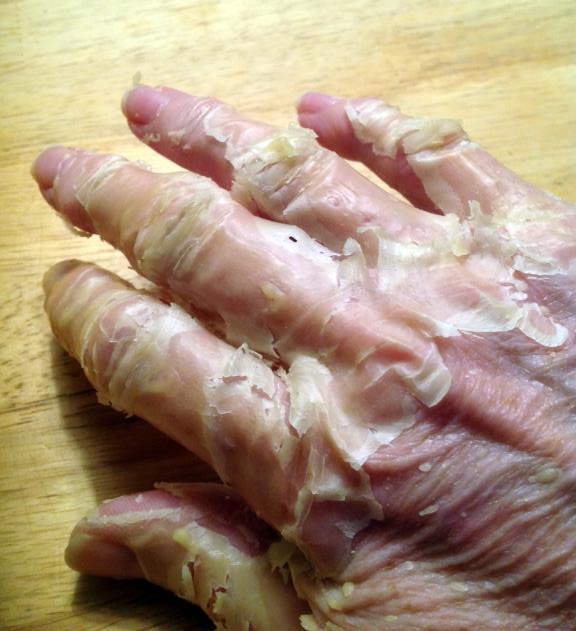 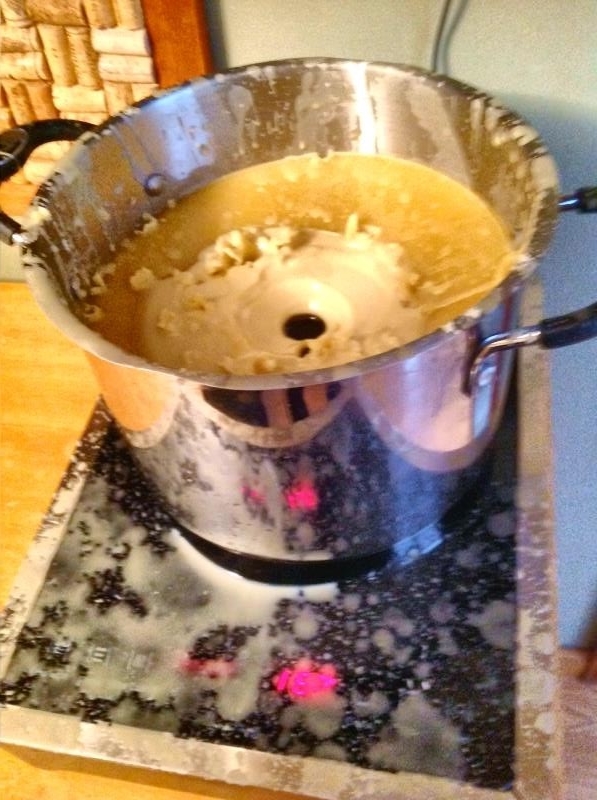 See that layer of wax in the pot? It’s only about a quarter inch thick. The pot is completely empty underneath. What must of happened was the wax on the bottom, right on the heating surface, melted waaaaay before the heat could reach the top. There was a LOT of wax in there – the pot holds something like 3 gallons. So the bottom layers kept heating and building up pressure, while the top solid layer kept it all clamped down. When NewWifey(tm) pierced the surface with that skewer,  it was like popping a zit. A zit filled with 3 gallons of hot, pressurized wax. (Cool that it formed a perfectly circular hole as it exploded out, don’t you think? Strangely, NewWifey(tm) didn’t seem all that impressed when I pointed it out.)

After getting over the initial shock (and of course, taking those selfies), NewWifey(tm) scraped off as much of the solidified wax as she could from her face, hand, and arms. But trying to get it out of her hair was taking off more hair than wax. So…to the internet, Batman! Various sites recommended rubbing vegetable oil through one’s hair, so she tried that. And it worked! (You may recall a similar thing happened to me when I got my head stuck to a glue mouse trap recently.)

But she now had a head full of salad oil. And she doesn’t even like salad!

Back to the internet.

And that’s why I got that email Monday morning at work.

So, yeah. Women! They can do anything a man can do.