Step 1: Buy two banana bunches at Price Chopper when they go on sale for 39-cents a pound. Make sure each bunch has at least 9 bananas. Bring home and place in back of crisper drawer, behind the bag of red peppers and clamshell containers of baby spinach so you’re sure to forget about them for at least 3 weeks.

Step 2: Have your wife come down with a urinary tract infection. Go to Price Chopper and buy her the largest bottle of cranberry juice cocktail you can carry.*

Step 3: Buy red peppers and clamshell containers of baby spinach from Price Chopper to replace the ones you used in that stir-fry last week. Spot the now jet black banana bunches you forgot about in the crisper drawer.

Step 4: Forget about the bananas for another week.

Step 6: Squeeze the semi-liquid bananas out of their skin and into a bowl. Keep a fan on.

Step 7: Add stuff like flour, baking powder + soda, a few eggs, melted butter, and anything else you can think of off the top of your head that goes into banana bread. Do NOT look up a recipe. The thrill of this dish is in the uncertainty.

Step 8: Note with alarm that you are out of milk products just as the banana dough starts setting like concrete. In desperation grab the half empty jar of cranberry juice cocktail. She can scratch for a day or two til you buy more. It won’t kill her. Add it all.

Step 9: Pull out the massive caterer-sized Pullman loaf pan you bought 15 years ago to make “Terrine de Canard” for 70 people at your wedding reception and haven’t had a reason to use since but can’t bring yourself to get rid of, and pour in the 9 pounds of banana bread batter.

Step 11: For the next 3 days eat banana bread either with, or for, breakfast, lunch, and dinner. When potassium poisoning becomes a real danger, wrap the remainder in foil and toss in the freezer.

Step 12: Go to Price Chopper and buy a half gallon tub of Butterscotch Swirl ice cream when your wife asks you to buy Caramel Swirl.

Step 13: Endure painful 25 minute long dissertation on the difference between “butterscotch” and “caramel”, and why one is dog shit and the other orgasmic.

Step 14: Go to Price Chopper and buy a half gallon tub of Caramel Swirl ice cream.

Step 15: Stare glumly at unloved, unwanted half gallon tub of Butterscotch Swirl ice cream in the freezer until inspiration strikes.

Step 16: Defrost frozen banana bread in microwave. Cut into cubes, spread on a half sheet, and pop it under the salamander (broiler) until they crisp up and lightly toast.

Step 17: Peel, core, and cube 2 or 3 Golden Delicious apples. Saute in butter over fairly high heat until just starting to caramelize, then flambe with Spanish solera brandy. Cook off alcohol and remove to cool.

Step 18: Put the unloved, unwanted Butterscotch Swirl ice cream in a saucepot and heat until melted. Remove from heat to cool.

Step 19: Whisk up, I dunno, 4? 6? 25? eggs. Enough that you think will thicken up a half gallon of melted Butterscotch Swirl ice cream.

Step 20: Whisk the half gallon of melted Butterscotch Swirl ice cream into the eggs. Add the bread cubes and apple chunks. Stir in a good pinch of salt and a glub of vanilla extract. And what the heck, might as well add the last of that bag of brown sugar that’s been taking up space on your shelf since last Thanksgiving. And some more white sugar too. This is America, after all.

Step 21: Drink some Spanish solera brandy. Accidentally drop a gill’s worth into the batter.

Step 22: Get out a Pyrex bowl that looks big enough to hold the batter. Smear a fistfull of butter around the inside, then fill ‘er up.

Step 23: When batter overflows the Pyrex bowl, curse your poor volume judging skills and get out the bigger Portuguese casserole dish. Butter that and pour in the batter from the Pyrex bowl, the remainder in the mixing bowl, and the overflow you’ve troweled off the counter.

Step 25: Remember that you forgot to pre-heat the oven.

Step 29. Fuck it. Put loaf pan in the oven, ready or not. It’ll get up to temp eventually.

Step 30: Go watch an episode of “Jewel in the Palace”. Oh no, Jang Geum is in trouble with the head cooking lady!

Step 31: Stick a knife in the loaf. Stare in amazement when it comes out all sticky and wet. Is the oven on?? It is.

Step 32: Go watch an episode of “Jewel in the Palace”. Oh no, Jang Geum is in trouble with the Royal physician now!

Step 33: Stick a knife in the loaf. Stare in amazement when it comes out sticky and wet. Seriously, is this thing on? It’s been two fucking hours already!

Step 34: Go watch half an episode of “Jewel in the Palace”. Fucking Jang Geum. Is she gonna get in trouble with the goddam EMPEROR now? Geez. I can’t watch this. Go check the loaf.

Step 36: Go finish watching that “Jewel in the Palace” episode. Yep. Jang Geum’s in trouble with the Emperor alright. What’s wrong with that girl? Beyotch gonna get a bludgeoning of Korean historical proportions if she’s not careful.

Step 37: Explain to your wife that yes, sometimes bread pudding is cooked in a loaf pan. Weather her scorn.

Step 40: Cut one for yourself. With sweetened sour cream on top. Because you’re out of heavy whipping cream, remember? Oh yeah, now I do.

* Yes, I know cranberry juice has been shown to be an ineffective treatment for UTI’s. But YOU tell that to a woman who screams her head off every time she sits to pee. 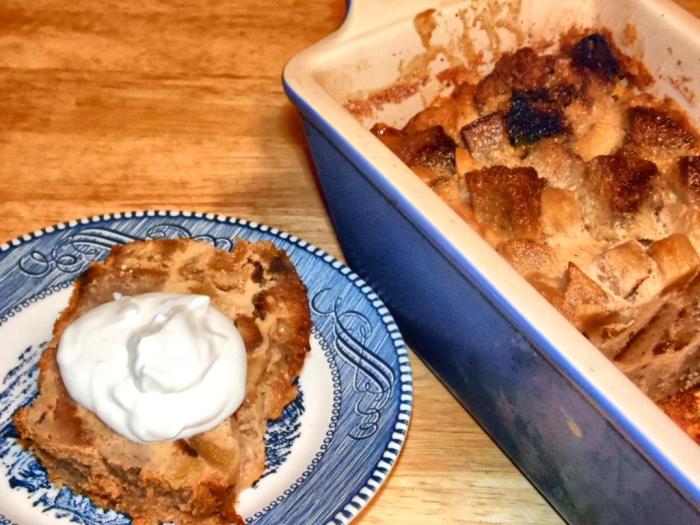